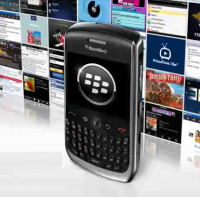 Twenty-four hours after the launch, pretty much everything that could have been said about the BlackBerry App World on device store has been said.

Something I believe they totally nailed? The flash teaser now up on http://www.blackberry.com — where BlackBerry App World Soundtrack is probably what really brings the video to life.

Though the #geranium I bought a few weeks ago was

Doesn't look as much, but it was actually a pretty

Just posted on @opensea the first 10 #nfts of my n

We often forget to look up at the sky. Sometimes i

Air fryer cooked corvina fish. Was concerned the a

Make sure NOT to do what mentioned below otherwise you'll lower my winning chances 😁 https://twitter.com/SteveAllenNFTer/status/1482340103926484999

This past year, the Unsplash community captured so many amazing moments and broke through SO many milestones.❤️

The highly anticipated #Particle whitelist & mint are almost upon us! We thought it would be a good time for a WHITELIST GIVEAWAY

50 lucky winners will be picked in 24 hours!